Infield Mix Drainage - DO NOT USE GRAVEL/STONE!

At multi-field complexes, drainage along the backstops can be challenging due to elevations of the press box building and bleacher areas of a facility.  There are many ways to design/drain the facility.  One way I would not recommend is using a stone "french" drain as is shown in the photo below: 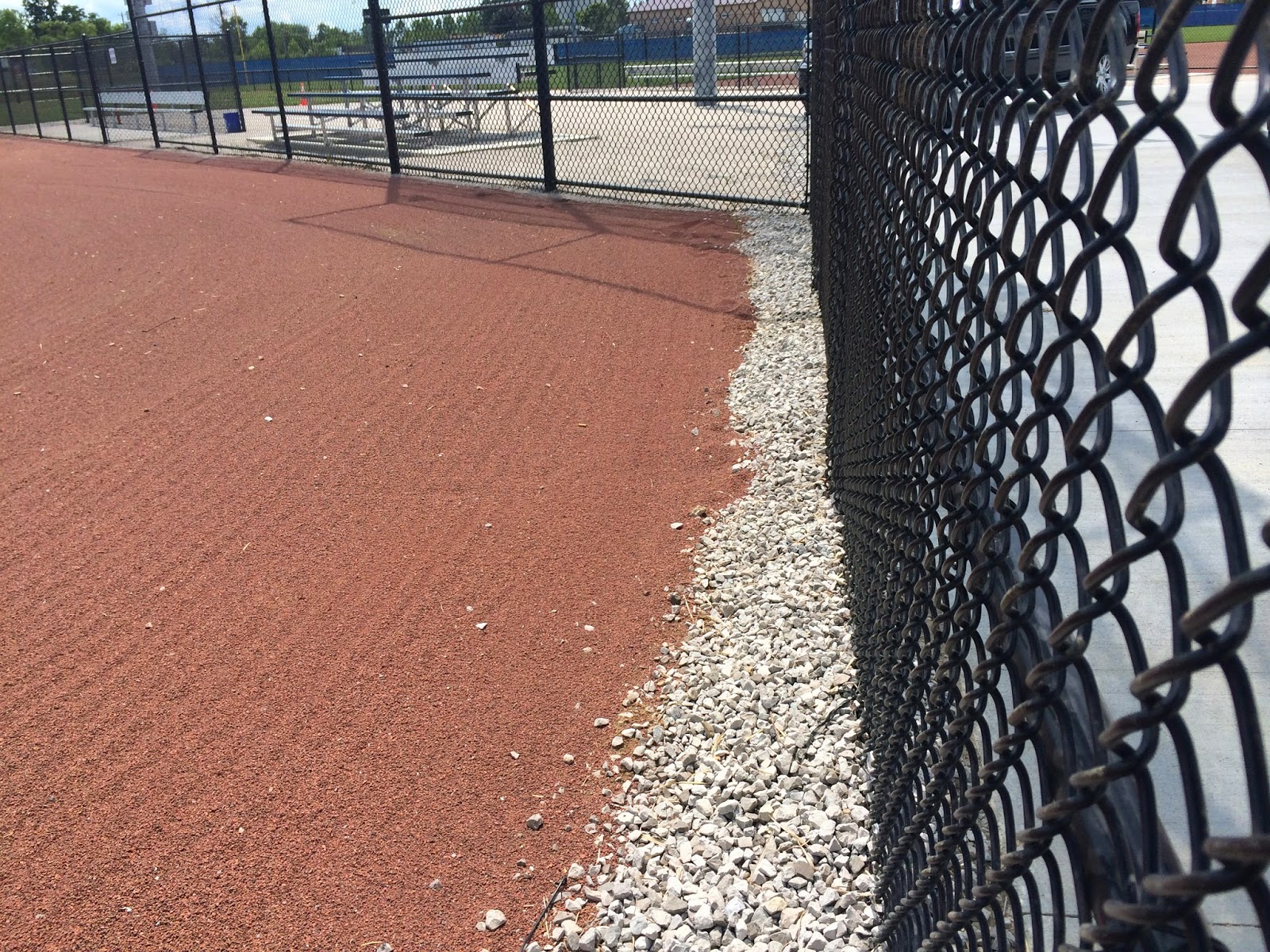 This drain will move water.  The problem?  The stone will migrate into the infield.  Stone is already present on this infield before the facility hosted its first game.

Mid July - Keep an Eye Out for Isolated Dry Spots

This past week the weather across the Midwest was cooler than normal with little or no humidity.  It is easy to get caught in the trap to lessen the irrigation during cooler summer periods.  If irrigation in lessened too much isolated dry areas can occur.  I had a coach this week ask me, "What does dry turf look like?"  "How can I tell if I am waiting too long between irrigation cycles?"

So, I decided to take a picture of an isolated dry spot on a field I visited yesterday.  Note - the graying of the turf on the right, this is turf that needs water ASAP.  The turf on the left will need water and a longer period of time to bounce back to an acceptable color. 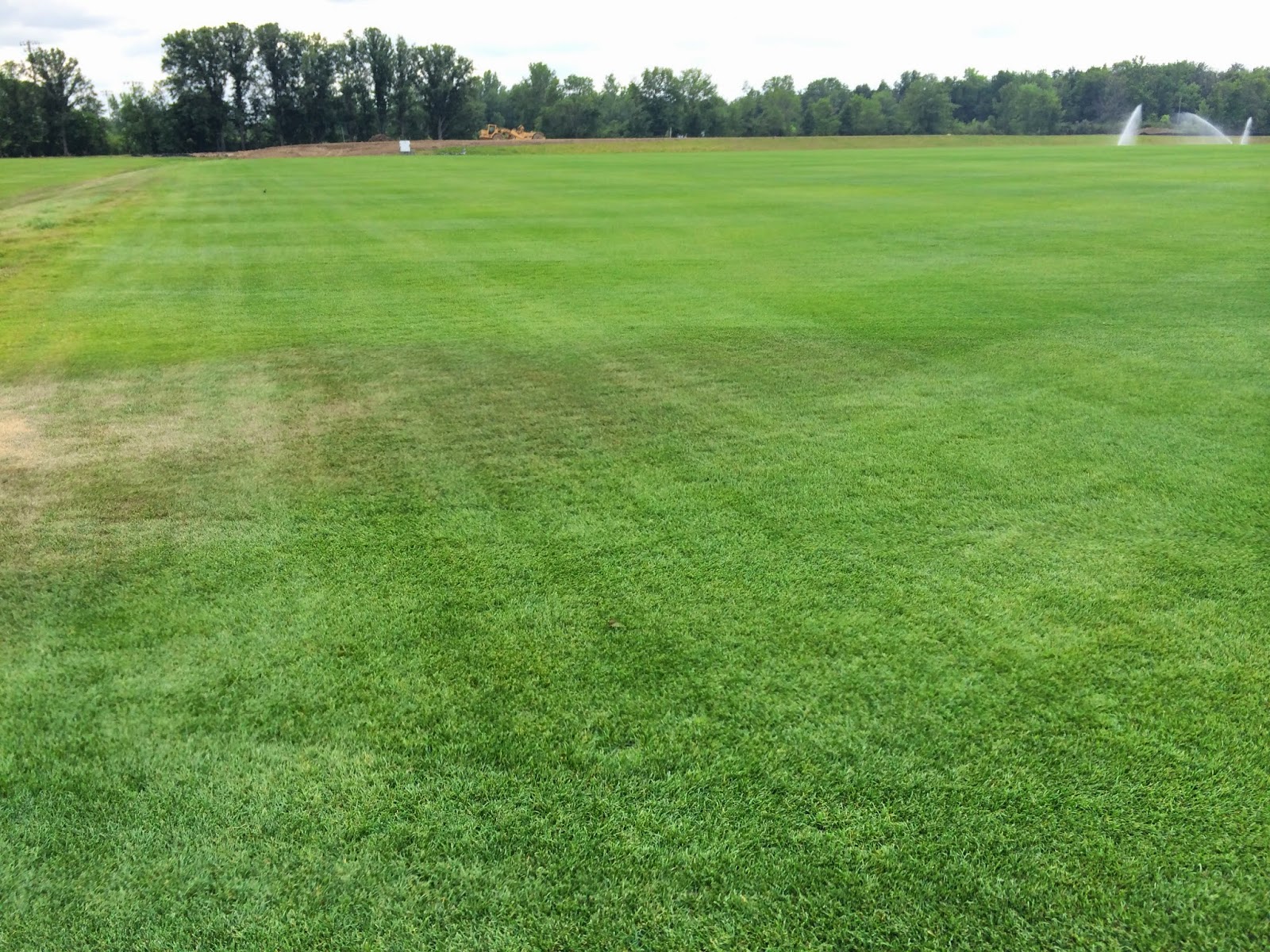 Bottom line, keep an eye on irrigation scheduling throughout the year, and adjust as necessary.

In case you missed it......  Last week, Andrew Berlin, owner of the South Bend SilverHawks announced that the synthetic playing surface at Four Winds Field will be replaced with natural grass.  Click HERE to see the video interview and his comments from WSBT in South Bend.  Very interesting comments. 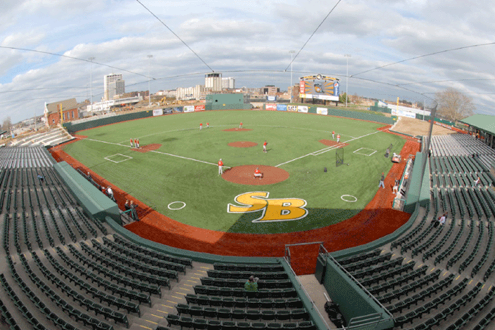 Yellow nutsedge is present in many turf stands.  Below are a couple of photos of nutsedge that I took today: 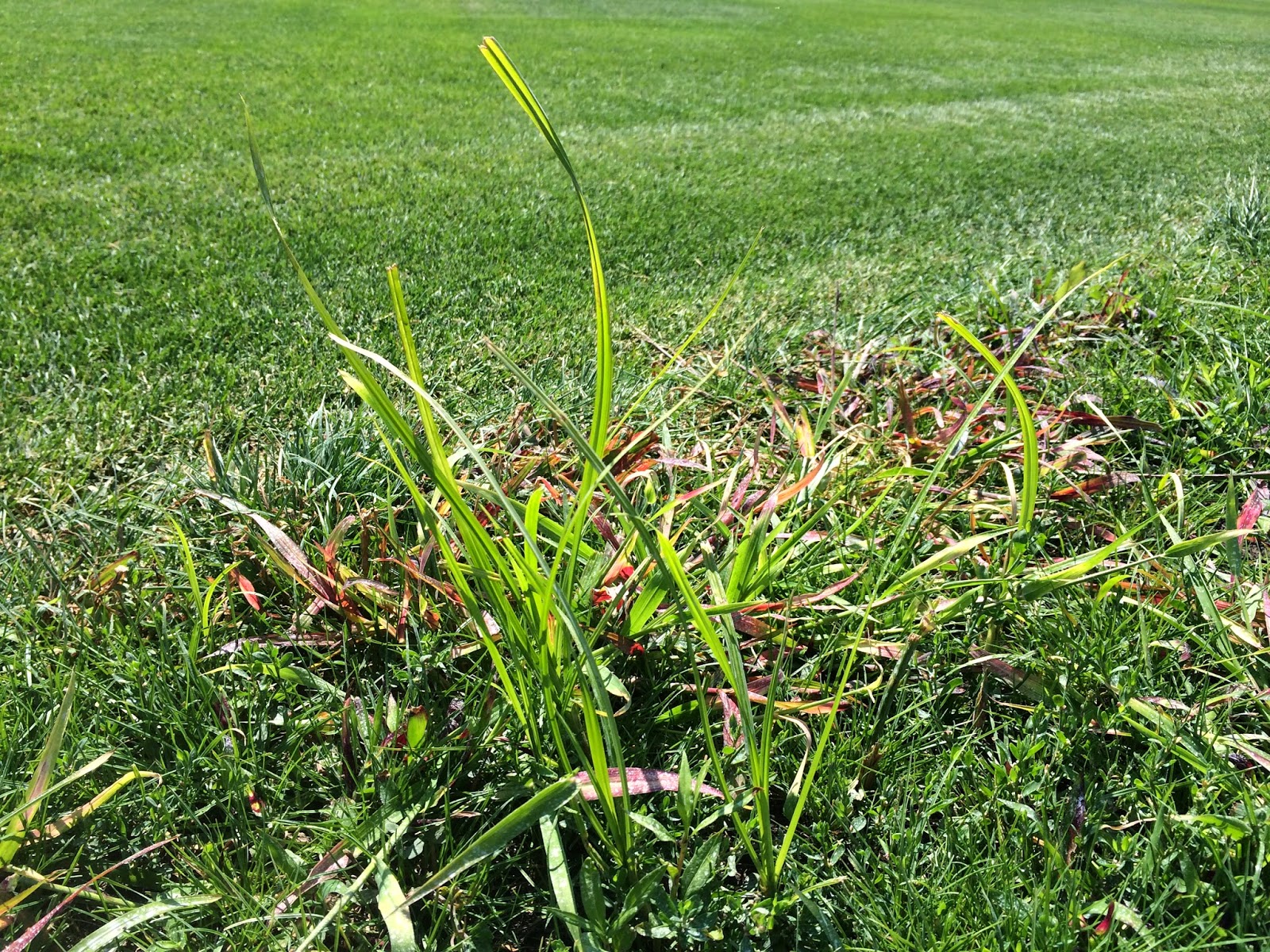 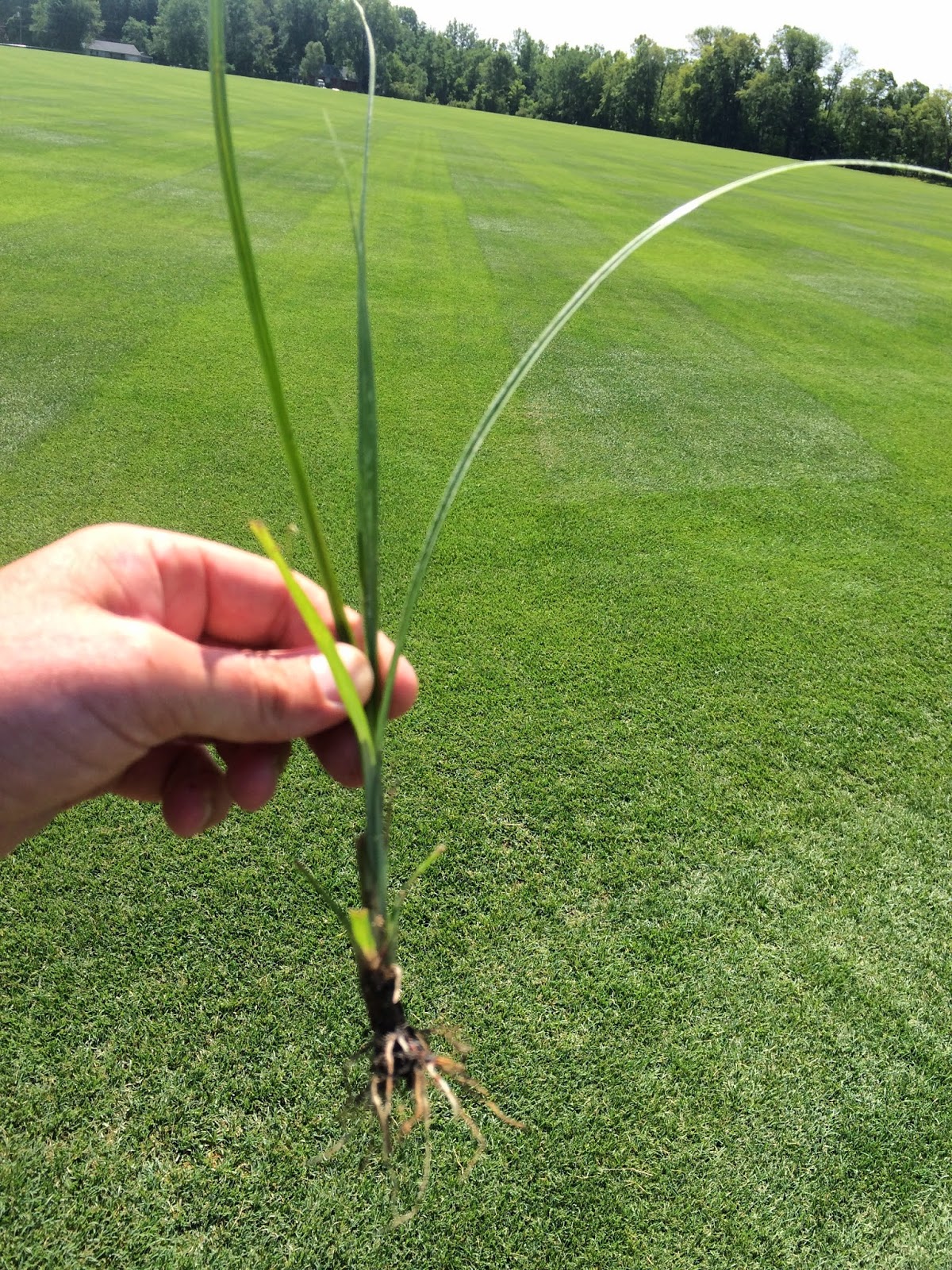 Want to learn more about Yellow Nutsedge?  HERE is an article from the Purdue University Turfgrass Department.

As many of you have seen, bermudagrass winterkill has been widespread.  The question I receive many times is, "Would a blanket help prevent damage?"

Oftentimes, I cannot give a firm answer, but I wanted to share a photo of a Patriot bermudagrass surface in central Indiana.  The hashmarks were covered with a blanket at the end of February.  The areas outside of the hashes were covered in mid March.  Notice a difference? 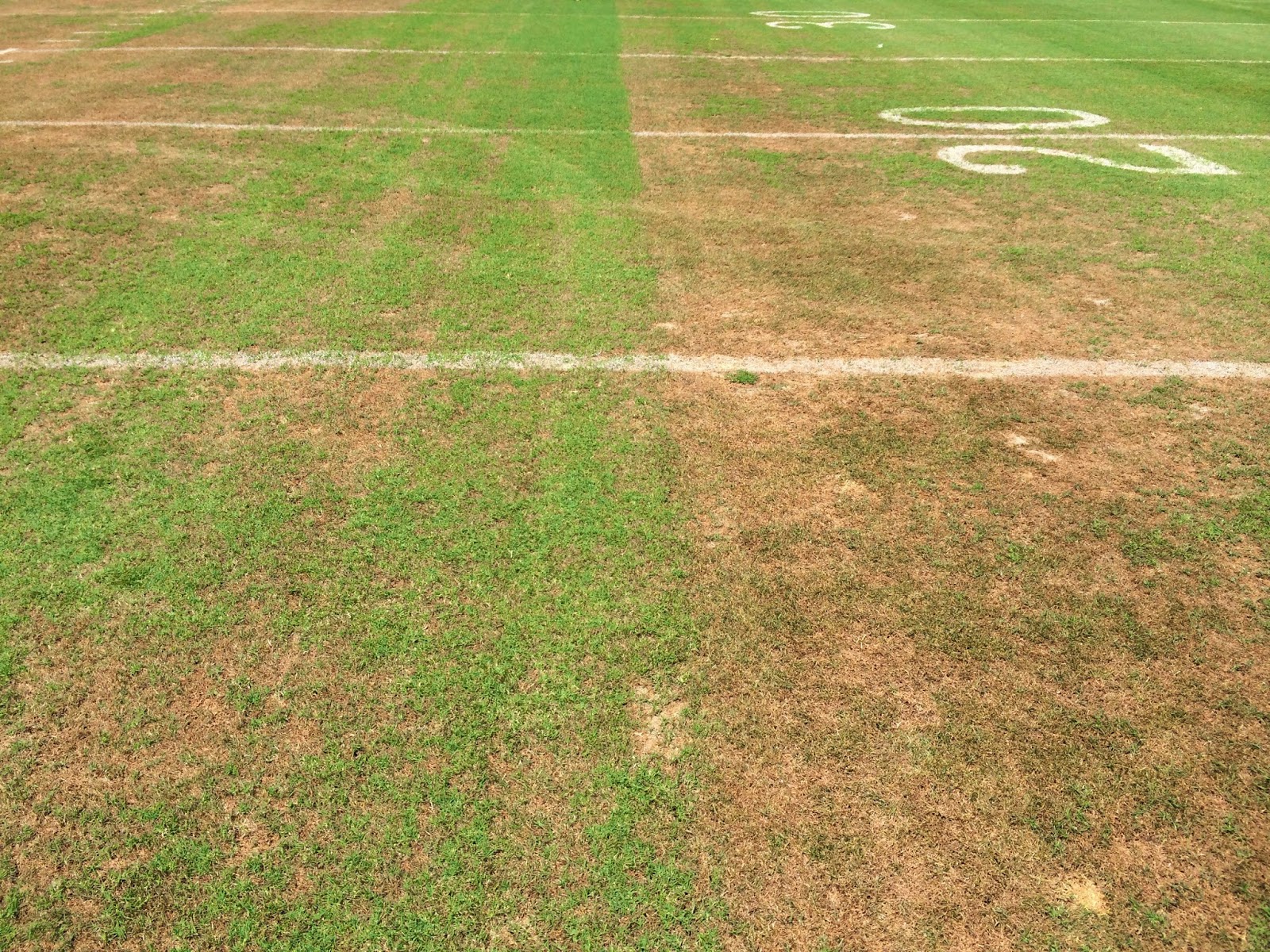 Winterkill is almost impossible to predict, but based on my research and data collecting over the winter, most bermudagrass in central Indiana was viable in late February.  Most, if not all damage took place in early March.

Looking for a good rain day project?  How about obtaining 2 sets of spare blades for each mower and keep them sharpened.  Then there are always 2 sets of blades to swap out when the growing season is extremely busy. 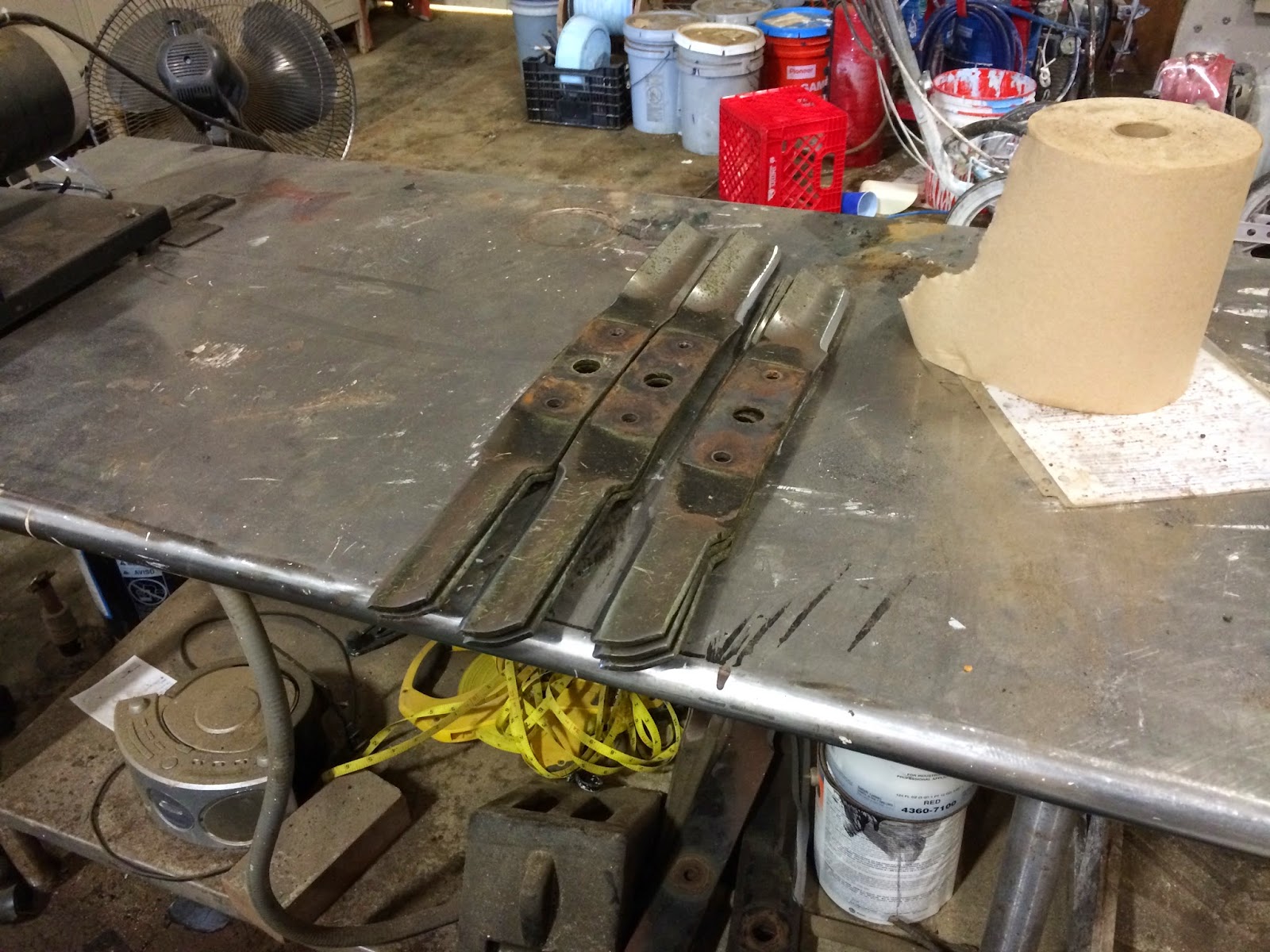