If you have not fertilized your turf in November, you may want to consider applying an application of water soluble fertilizer before winter arrives.  Why?  HERE is a great article by Dr. John Street, Pan Sherratt, and Dr. Karl Danneberger from Ohio State University explaining the benefits of late season fertilizer and spring green-up. 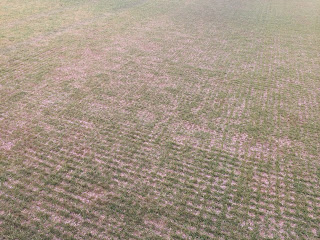 Should I Condition My Infield Before Winter?

That is a question I have received numerous times this past week as baseball and softball coaches wrap up their fall field renovations.  The answer is, depends on the expectations of play in early spring 2014.

If there will be a need to roll the infields and play early in the spring (think late Feb. / early Mar.), yes I would condition the infields with at least 1/4 inch of topdressing.

If there is no need for rolling and play until later in the spring (think late Mar. / early April), no I would not condition the infield prior to winter.

Why condition?  The conditioner will allow the infield to become workable more quickly in the spring to roll prior to first activity.  To see an earlier post on rolling fields, click HERE.

Why not condition?  Conditioner will blow around the infield surface over the winter and can cause the buildup of material causing infield lips.

The end goal is to have an infield that provides cleat in and cleat out performance as shown in the photo below: 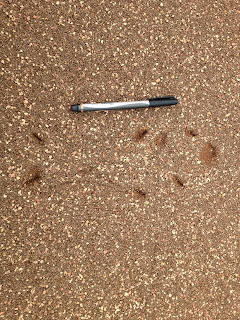 To see two earlier posts on depth of conditioners, click HERE and HERE.

Posted by Jamie Mehringer at 10:33 AM 0 comments

It's Not Dead - It's Dormant

With bermudagrass plants dormant this time of year.  Many people ask the question, "What happened to the field?  Is is dead?"  Short answer, no it is dormant.  Here is a photo taken 2 weeks ago.  On the left is bluegrass sod.  On the right is dormant Riviera bermudagrass. 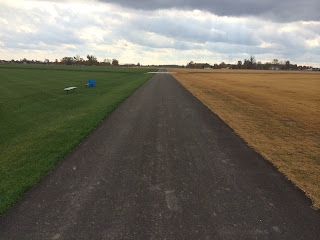 Why does bermudagrass go dormant?  HERE is a great article from Chris Hartwiger, senior agronomist with the USGA.

Back to the Reds Urban Youth Academy in Cincinnati, OH.  Here are a few photos of the grow-in.  The Barenbrug HGT Kentucky bluegrass has grown in well and the fields will be ready for play in the spring of 2014.

Aerials - Note the outfield on the upper left on the first photo was not regraded/reseeded: 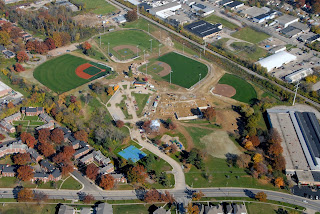 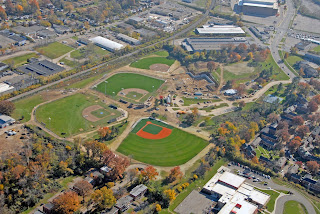 A couple closer views of the playing surface 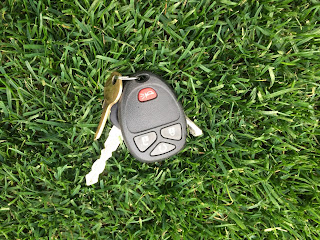 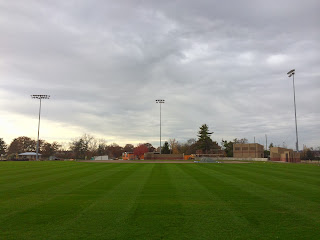 Check back in for future updates in regards to this project.

To see earlier posts from this project, click HERE and HERE.

Dormant Seeding - Do Not Seed Too Early 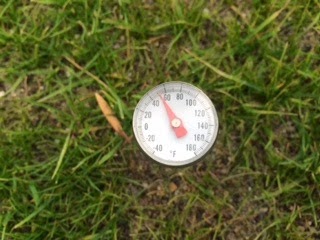 Click HERE to see a great article for dormant seeding from Dr Zac Reicher at the University of Nebraska.  Dormant seeding is a great approach, just be careful to not apply the seed too early in the fall.

Is it Too Late to Apply Broadleaf Weed Control?

The short answer is no if your facility in is central Indiana and areas south. 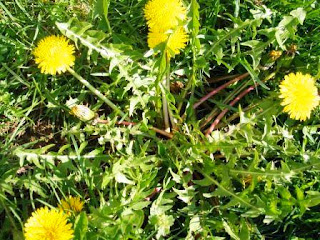 HERE is a great Turf Tip from Aaron Patton, Purdue Turfgrass Extension Specialist.  Bottom line, if you have not applied broadleaf weed control this fall, you still have time for this critical application to maintain a weed free stand of turfgrass in the spring.

Play on!
--Jamie
@JamieMehringer
Posted by Jamie Mehringer at 10:18 AM 0 comments

This week, I was in the greater Lakeland area and had the time to stop by and check on the field.  Here are a few photos: 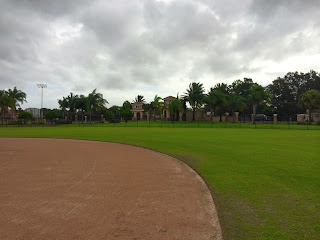 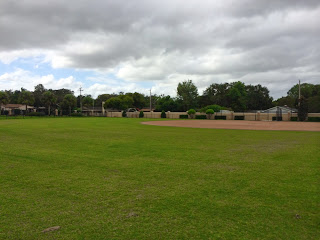 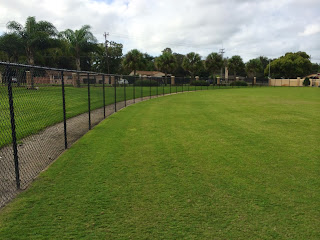 As you can see, a new fence was installed this fall.  The Celebration bermudagrass has performed well.  The Dura Edge Classic infield mix performed at a high level through the first season where the field was used as a practice field.  Starting in spring of 2014, the Southeastern University Fire will host a full softball season at their new field.

Posted by Jamie Mehringer at 11:28 AM 0 comments

I have received a number of calls in regards to slow grow-ins of Kentucky bluegrass surfaces.  Bottom line, this time of year, the turf will have to pushed aggressively with nitrogen to achieve 100% cover before the winter season. 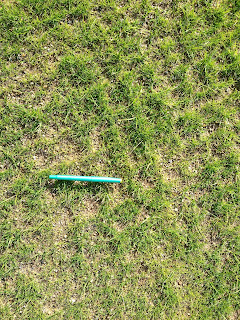 Click HERE to see an article from Dr. David Minner at Iowa State University.  Take a close look at the last 2 paragraphs.  Push that bluegrass during grow-ins when required.

Play on!
--Jamie
@JamieMehringer
Posted by Jamie Mehringer at 8:46 AM 0 comments

Tricks of the Trade - Tarp Weights

There are many ways to weigh down mound and plate tarps.  Here is one method that I ran across this week.

Simply take a rope knot it on one end and run it through PVC pipe.  Fill with sand and glue the caps together. 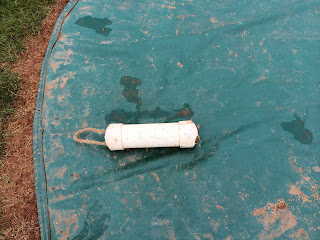 Play on!
--Jamie
@JamieMehringer
Posted by Jamie Mehringer at 8:50 AM 0 comments